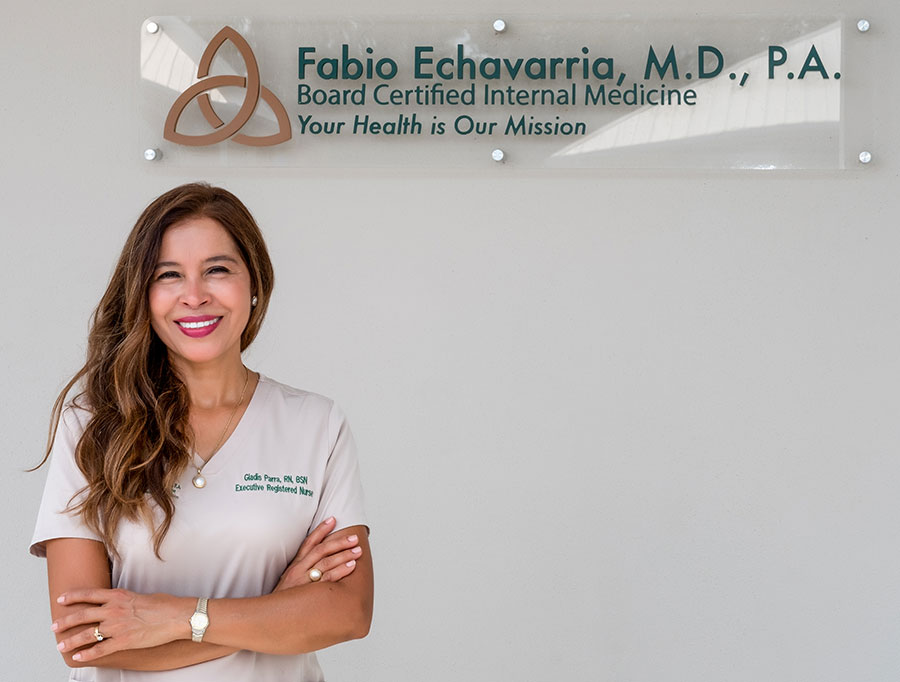 Gladis is the Executive Nurse at Fabio Echavarria M.D., P.A in Clermont, FL.  In her role, she plans, organizes, and directs administrative functions of the practice.  Participate in financial and cost containment decisions, Implements protocols, and supervises patients care in concert with the providers.  Her goal is that each patient feels like a member of an extended family during their visit.

She received her Bachelors Of Science in Nursing from the Institute of Health of Science CES in Medellin, Colombia in 1985, and practiced in Colombia for four years where she was in charge of the Pediatric, OBGYN, and ER Unit in a Regional Hospital.  She also worked as a Staff Nurse for the professional cycling team during The Pan-American Games representing Antioquia Colombia. Her passion for community services positioned her as the Coordinator Nurse for the “Patrulla Area Colombiana ” in Antioquia,  an air support organization reaching the poorest and most remote areas of the country providing medical and surgical services.

Gladis moved to the United States in 1989 and obtained her Certification in Nursing from The Commission of Foreign Graduates in Nursing School USA and became a Registered Nurse in the states of New York and Florida. Gladis started her career at Coral Gables Hospital in Miami, FL as a Staff Nurse where she became the Clinical Educator for the Med/Surg Unit. She later transferred internally to the Endoscopy Unit and was promoted to a Clinical Resource Nurse for the Bronchoscopy and Endoscopy Units. While at Coral Gables Hospital she volunteered as a staff nurse for a team of dedicated doctors and nurses that provided medical missions to the Dominican Republic.

She moved to Binghamton, New York and joined the Nursing staff in the Cardiac and Coronary Care Unit at Wilson Memorial Medical Center. Cardiology became another field of her career that she truly enjoys.

In 2000 she moved back to the Sunshine estate and worked at the Orlando Regional Medical Center in the Cardiac/ Cath Recovery Room, Pre and Post Coronary Angioplasty Unit, and Endoscopy Suite.

She is married and has one daughter. On her days off she enjoys spending time with family and friends. She loves music, dancing, walking on the beach, and outdoors activities.

Visit our Patient Portal site to login and start getting more from your healthcare today!
VIEW MORE